OTTAWA – In a somewhat surprising move, the Heritage Ministry on Thursday decided to share the draft policy directive to the CRTC which is to be delivered to the Regulator once the bill aimed at updating the Broadcasting Act is passed.

The draft direction (as in, not final) was supposed to provide more clarity into what the government expects from the CRTC after the passage of C-10, a bill to modernize the Broadcasting Act. But, to be honest, there isn’t much direction in the directive which hasn’t already been examined during our reportage on the bill so far.

The Parliamentary Committee of Canadian Heritage which is studying Bill C-10, met the next morning. In the first hour, the committee heard from the witnesses from the February 19 meeting, which was interrupted by a vote of the House of Commons.

The second hour saw Pierre Karl Péladeau, CEO of Québecor, radically simplify the issues at hand and cast serious doubts in the ability of the CRTC to regulate the Internet and instead said the legislation should deregulate local broadcasters. “You cannot regulate the unregulatable,” he said.

“Canadian Heritage’s presentation on Bill C-10 states that the bill will ‘address any regulatory asymmetries and provide flexibility and predictability.’ Well, we are forced to conclude that the bill in its present state fails to meet these objectives,” he said, in French, in his opening statement.

A joint presentation from the Motion Picture Association-Canada (MPA-C) and the International Alliance of Theatrical Stage Employees (IATSE) brought studio owners and their employees together. The MPA represents global studios, including Netflix, and its president, Wendy Noss said they employ 94,000 Canadians a year (the association has also ramped up its lobbying, which includes advertising on Cartt.ca the many benefits its members bring to the Canadian economy).

“Some argue that Bill C-10 should impose the same ‘like for like’ obligations on online undertakings as Canadian broadcasters. This argument implies that nothing has changed in decades, from a time when the Broadcasting Act was designed to limit consumer choice,” said Noss.

“In 2019 Warner Entertainment was the largest single employer in BC. Where were the CBC, Rogers, Bell Media? They produced nothing in the province.” – John Morgan Lewis, IATSE

If that was too subtle, here’s John Morgan Lewis, from the IATSE – representing 150,000 members across North America, and 30,000 in Canada:

“We must address changes to the Broadcast Act from a sense of confidence and optimism. Our industry is booming. We are thriving not because of content quotas and regulatory restrictions but because we are good,” he said.

He is not opposed to foreign streamers contributing to the domestic industry, however. ‘We believe they should, but when determining that contribution, we would ask that the Committee consider the full scope of their contributions,’ he went on.

He gave an example. “In 2019 Warner Entertainment was the largest single employer in BC. Where were the CBC, Rogers, Bell Media? They produced nothing in the province,” Lewis said, referencing media production.

“I am disappointed to hear some commentators complain that foreign service productions do not employ Canadian Creative Talent. Really? The vast majority of creative positions on foreign service productions are Canadian and to suggest otherwise is not supported by the facts. Even worse, it suggests the work of the talented Canadians on Star Trek in Toronto, Deadpool in Vancouver and X-Men in Montreal are not as important or should somehow be discounted. I call that cultural elitism and it should not inform our policy decisions.

“If I can leave you with one note of concern from the workers in the industry it would be — Do no harm.”

After hearing the witnesses, the Committee went in camera to discuss Committee business and agreed to, “pursuant to Standing Order 108 (1)(a), and further to the motion adopted by the committee on February 26, 2021, Mark Zuckerberg, Chief Executive Officer of Facebook, be summoned to appear before the committee for at least 90 minutes at a date, time, and location to be determined by the Chair, but no later than 30 days following the adoption of this motion.”

We might soon find out if the web giants will accept Canadian jurisdiction, but we wonder if Facebook’s owner will answer the committee’s call or send his Canadian lieutenants.

Next week, the House is not sitting and so the Committee will resume on the March 22 where Bell Canada, Unifor, Friends of Canadian Broadcasting, Fédération nationale des communications et de la culture, and ACTRA will face the politicians.

For the benefit of our readers, here are a few takeaways or the draft Policy Directive (and if you really want to flex your wonkular muscles, the whole thing can be found below the story):

The CRTC is directed to:

Ed note: The last time just the TV regs were overhauled (remember Let’s Talk TV?), it took three years and most at the Commission and in the industry thought that to be a breakneck pace… 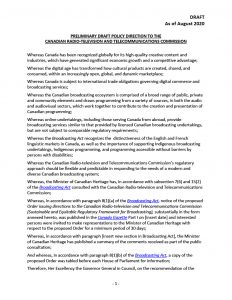 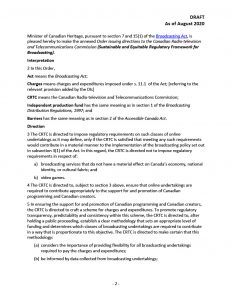 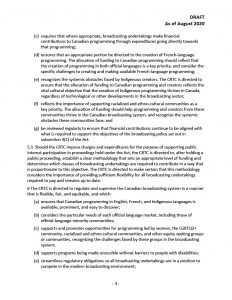 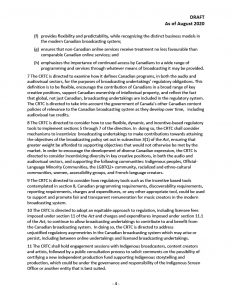 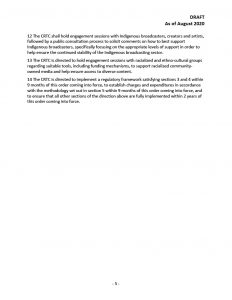