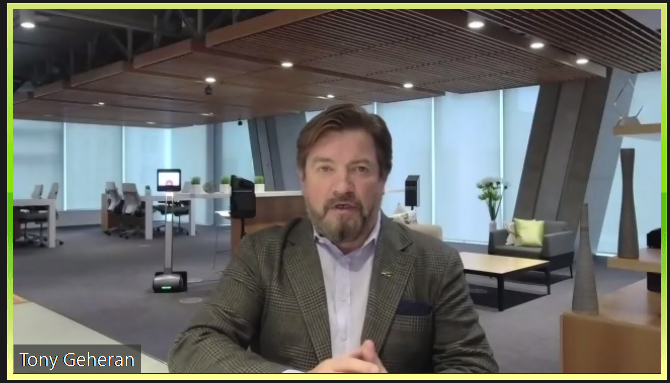 VANCOUVER – Talk to anyone in the telecom industry and they know one of the most pressing challenges facing Canada is connecting our Indigenous communities to proper, and affordable, broadband.

In his Thursday keynote to the online Canadian Telecom Summit, Tony Geheran (above), executive vice-president, and chief customer officer, at Telus outlined the company’s commitment to connecting those communities to fibre.

Geheran went through the company’s various PureFibre, Health, Agriculture and Telus for Good spending, in the billions over the years, connecting millions of Canadians in various ways for various services.

However, what stood out in his speech was the company’s commitment to extending its networks to the Indigenous communities in its footprint (The company released its Indigenous Connectivity Report just last week, too.

Next month, he explained, Telus will put the finishing touches on “a project that provides 14 remote communities with high-speed wireless Internet and mobile services on Quebec’s Lower North Shore, an area that is accessible only by snowmobile, boat or helicopter. Thanks to a partnership with the federal government and the Government of Quebec, 5,000 residents now benefit from high-speed connectivity through one of the most extensive and advanced microwave ecosystems in the world.”

He also told a bit more intimate story about how connecting the Haisla Nation may well help save its language.

“For over 9,000 years, the Haisla Nation have occupied their traditional territory spanning over 4 million acres of rich and diverse lands and waterways. Today, 700 of Haisla’s 1,700 members live in their home community of Kitamaat Village in northern B.C. Haisla Nation is leveraging technology to undergo an important project to protect and revitalize the Haisla language.

With Telus fibre now installed, “community members living within and outside their home territory can access online resources, such as videos and language lessons,” Geheran said. “Teresa Windsor, a member of the Haisla Nation, shared that with the youngest fluent speaker at 61-years-old, revitalizing the language is a race against time. Through learning the language, she has found immense confidence and strength, which has cascaded down to her family and community. Aunties are calling to ask for language documents, cousins are calling wanting to join learning sessions, and her young daughter is now learning as well.”

To help connect more communities like this (where the economics for fibre runs are challenging, to say the least and require government help) Geheran also delivered a message asking governments for:

“Historically, spectrum policy has been designed to promote competition, but after 12 years we can see clearly that it has had unintended consequences for rural Canadians. Incredibly, 85% of rural spectrum remains unused by set-aside eligible carriers (which include Shaw, Videotron and Eastlink). Imagine how much more connectivity there would be for rural Canadians today if that spectrum was actually put to use. The current practice of setting aside more than 40% of available spectrum for regional providers is not working for rural Canada,” he warned.

When asked during the Q&A period after his speech what should be done with spectrum he says is not being deployed in rural areas by the regional wireless companies, he said: “If they’re not going to use it and they don’t have plans to use it in the next 18 months, then I would suggest we recover that spectrum and re-allocate it so that it can be put to work effectively, to the benefit of rural Canadians.”