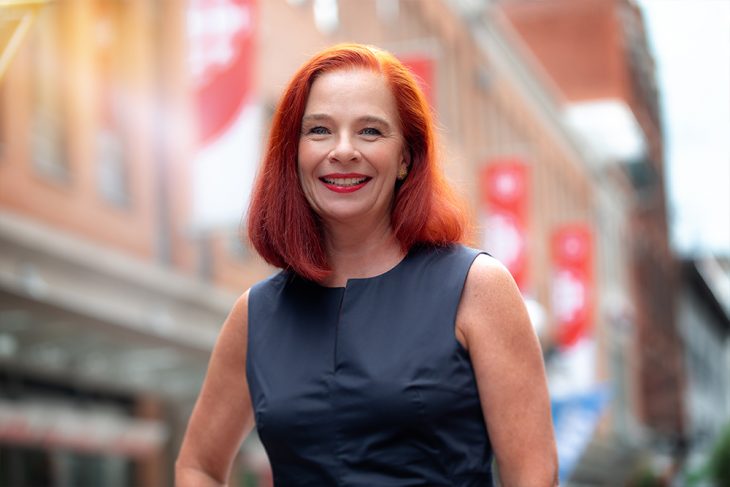 THE PAST SIX MONTHS have transformed Canada and the world. It has changed how we work, how we shop, how we interact with friends and family. It has been an unsettling lesson in how quickly everything we take for granted can change. And as we head into autumn and winter, we are all worried about a second wave, and the health of our families and our society.

At CBC/Radio-Canada, Covid-19 has redoubled our attention on what is most important about serving Canadians: trusted news, serving local communities, and supporting Canadian creators who depend on us.

Canada’s media industry was already in the midst of rapid transformation, grappling with the growing dominance of foreign players, the crisis in local news, and the alarming proliferation of disinformation. Then, within a matter of days, entertainment shows in production were shut down. Employees had to grab their laptops and go home. For broadcasters, program schedules were in disarray as we all dealt with an accelerated news cycle that has not let up since. Credible news and information suddenly became more critical than ever — a matter of life and death — while journalists had to work in entirely new ways to bring that news to Canadians.

We focused our work around the one thing Canadians were most desperate for: news they could trust. Facts from the experts. Up-to-the-minute data about the spread of the virus. They had hundreds of questions. They needed to know what was happening in their community, across the country, and around the world. With our private broadcaster colleagues and the BDUs, we pulled down the paywalls to our 24-hour news services, CBC News Network and ICI RDI.

I’m very proud of how our journalists responded, with new content and innovative solutions on every platform for all our audiences, especially kids. They offered Canadians credible information and helped counter the misinformation that was out there. We worked with our private media colleagues to pool resources and to support trusted news. Now more than ever, we know that a strong, diverse news ecosystem is vital to democracy.

“Some might still question why CBC/Radio-Canada has invested in digital. Covid has answered that question: Canadians need us there.”

Canadians turned to us in record numbers, especially online. Some might still question why CBC/Radio-Canada has invested in digital. Covid has answered that question: Canadians need us there. It is where they go for reliable information in real time. At the height of the crisis, CBC/Radio-Canada’s online platforms became the top Canadian web destination after Google, Microsoft and Facebook. Over 24 million Canadians each month, 77% of everyone who is online. CBC Kids News and Radio-Canada’s MAJ handed the mic to children, helping them answer their questions and work through their fears. In April, when the schools suddenly closed, we offered our digital learning platform, Curio.ca, directly to parents and students in lockdown at home.

Our journalists in more than 60 locations, working in English, French and Indigenous languages, are sometimes the only journalists based in the community. We learned just how essential that local presence is.

In the early days of the pandemic, the surge in live news feeds all across the country forced us to temporarily scale back local CBC supper hour TV newscasts. Local radio and digital news services were unaffected, and we began restoring local TV news almost immediately — but the public reaction was fast and clear. People wanted to hear what was happening from their local television anchors and reporters. They saw this as a crucial service.

But it wasn’t all news. People in lockdown needed a break. Artists across the country needed help, as festivals, concert halls, and theatres went dark. So we stepped up, offering more Canadian drama, comedy, documentaries, and music on radio and TV; on our video streaming services, CBC Gem and ICI TOU.TV; and on our audio streaming services, CBC Listen and Radio-Canada OHdio.

For CBC, the first of our treasured live celebrations hit by Covid was the Juno Awards, originally scheduled for March 15 in Saskatoon. With our partner CARAS, CBC Music pivoted and launched Junos 365 Songwriters’ Circle, five virtual events that showcased Canadian songwriters.

In April, we joined with our private broadcaster colleagues and with Canadian artists for Stronger Together/Tous Ensemble, a tribute to this country’s front line workers, watched by over 12 million Canadians, an all-time record audience.

In May, Radio-Canada’s En direct de l’univers celebrated Mother’s Day (capturing 1.6 million AMA and 48 percent audience share). We also helped Canadian playwrights whose shows were cancelled by turning their works into radio and podcast adaptations. Plays such as the Théâtre du Nouveau Parking’s Solstice, Tu te souviendras de moi from François Archambault, and the drama Les partisans from Winnipeg were adapted to radio and made available on Radio-Canada OHdio. CBC Podcasts’ PlayME launched a new audio fiction series, The Quarantine Chronicles, written during the pandemic by top Canadian playwrights, including the comedy Don’t Get Me Startered from Mark Crawford, the sci-fi play Liming by Leah-Simone Bowen, and Jordan Tannahill’s drama Raking Lights.

In these ways, wherever possible, we leveraged our streaming platforms to amplify the voices of Canada’s artists and creators. We partnered with the Hot Docs Festival to launch Hot Docs at Home on CBC, showcasing festival premieres exclusively on CBC TV, CBC Gem and documentary Channel; we partnered with the Canada Council for the Arts to bring its vast community of artists to audiences through the Digital Originals funding initiative. And we supported local artists by presenting Le petit Festival ICI MUSIQUE, an at-home festival that featured performances by musicians from several regions of the country. Finally, in response to the postponement of the 2020 Tokyo Olympic and Paralympic Games, we launched the Olympic Channel on CBC Gem.

We saw how much our creators depend upon their public broadcaster when close to 10,000 applied for the CBC Creative Relief Fund. With just $2.2 million in development and production funding, we are supporting 119 original Canadian projects — including 51 from self-identified Black, Indigenous, and People of Colour (BIPOC) creators.

“The deeply disturbing incidents of anti-Black racism this summer reminded us that, despite our commitment to reflect the diversity of this country, progress isn’t happening fast enough.”

The deeply disturbing incidents of anti-Black racism this summer reminded us that, despite our commitment to reflect the diversity of this country, progress isn’t happening fast enough. As the country’s public broadcaster, we have a unique role to play in accelerating representation of ALL Canadians on our platforms, in the news we report and the stories we tell. Reflecting contemporary Canada — including the realities of Indigenous peoples, Black and racialized people, and people with disabilities — is critical to CBC/Radio-Canada remaining relevant to today’s audiences and to future generations. That’s why we are accelerating our efforts to do so in our content; in our workforce hiring, retention and promotion; and in our workplace culture.

Together with our independent producer partners, and with the support of the Canada Media Fund, we have restarted all of our homegrown productions, from returning favourites like Radio-Canada’s District 31 and CBC’s Kim’s Convenience, to new shows like Fragile and the Indigenous-led series, Trickster. More than 30 productions are now underway or about to start filming, all across the country. That’s important not just to our audiences and for Canadian culture, but to the tens of thousands of people whose households include someone working in our industry on an original homegrown production.

For example, one season of the CBC drama Heartland, filmed in Alberta, generates $48.3 million in economic spinoffs, and supports 468 full-time jobs. Across the country, every dollar invested in CBC/Radio-Canada creates close to three dollars of economic activity in Canada. CBC/Radio-Canada will be a cornerstone in the recovery we all hope for in the months ahead.

“We know that the vulnerabilities of our domestic media industry have been accelerated by this pandemic. And, in some things such as Canadians’ appetite for digital delivery of global content, we will never turn back the clock.”

Like all Canadians, we are bracing for the next phase of this pandemic — one filled with yet more uncertainty. In the words of the American baseball legend, Yogi Berra, “The future ain’t what it used to be.” We know that the creative industries have been profoundly hit by this crisis and it may be years before we return to pre-Covid life. We know that the vulnerabilities of our domestic media industry have been accelerated by this pandemic. And, in some things such as Canadians’ appetite for digital delivery of global content, we will never turn back the clock. But let us not forget the glow of the Schitt’s Creek Emmy sweep; the 24 million Canadians who turn to our digital platforms; the 13 million monthly podcast downloads; and the round-the-clock trustworthy news.

At CBC/Radio-Canada, we remain razor-focused on what we already knew, and the lessons driven home to us during this pandemic: we are here to serve Canadians. We will continue to report and deliver trusted news; we will remain rooted and connected in local communities and in so doing, connect the country; and we are stepping up to play our part in the recovery of Canada’s creative sector.

This is how we serve Canadians.