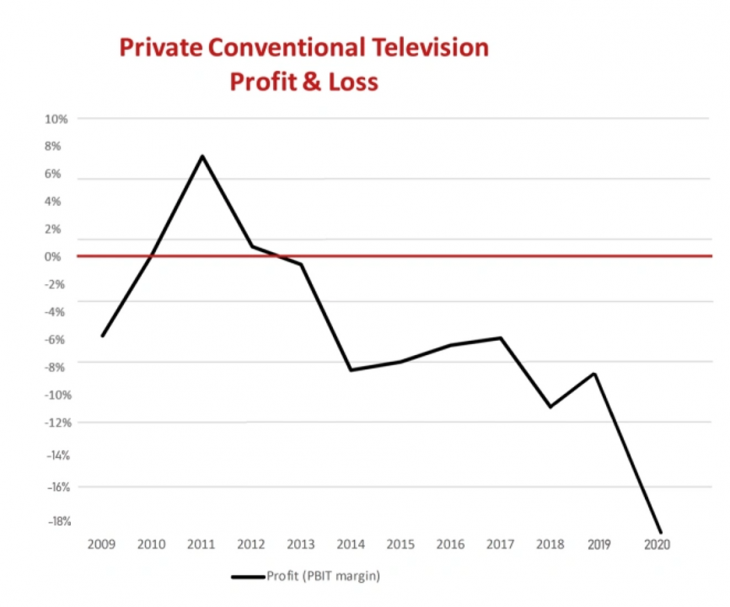 IF JOURNALISTS IN politics are the friends of news media, perhaps it needs new friends.

Meanwhile Senator Pamela Wallin, another former TV journalist, tried to get Unifor Media Director Randy Kitt to agree that the problem was the CBC competing in the advertising market with private networks.

One gets the feeling that off camera there are a lot of Senators and MPs stifling a big yawn about local TV news.

They would be in good company. Despite all of the piety and genuflection about the vital role of local TV news, the CRTC has done zilch in the last ten years. Ergo Unifor’s C-11 amendment to get the Commission to do its job.

In a 2006 study, the Commission projected the coming collapse of the advertising-only business model for local TV. By 2010 the Commission under Konrad Von Finckenstein —-no Leftie it’s safe to say—- came up with two separate schemes to compel the profitable cable companies to cross subsidize local broadcasters.

In 2012 the Supreme Court struck down the “fee-for-carriage” scheme on a 5 to 4 vote as contrary to copyright legislation. The same year, Von Finckenstein’s successor as Chair Leonard Katz terminated the other project, the Local Programming Improvement Fund (LPIF), on the rosy prediction that advertising revenues would rebound for TV.

In 2015 the next CRTC chair J.P. Blais pontificated from the Commission dais about how the major networks ought to be better corporate citizens and keep losing money on local news (private conventional TV has lost money every year since 2012, currently running at a 12% loss).

Blais remodelled and marginally increased an existing industry cross-subsidy for independent stations, the Independent Local News Fund, which since 2017 has shrunk from $23M to $17M in tandem with declining cable revenues.

The ILNF will be bankrupted next year when an additional twelve Global TV stations, divested by Shaw, become eligible.

That brings us to the Unifor amendment which MediaPolicy.ca wrote about here before it was rejected in the House by Liberal and Conservative MPs (who simultaneously approved abolishing $120M in “Part II” fees paid by TV companies to the CRTC):

Elegant, isn’t it? Full disclosure: as Unifor’s former media director when Bill C-10 was debated in 2021, I drafted it.

First, the CRTC would have a fresh and explicit mandate from Parliament to increase the flow of internal cross subsidies from the cable and satellite businesses to local broadcasting stations.

This is exactly what the LPIF did before it was killed off ten years ago at the urging of the cable companies. The reference to “online undertakings” is future proofing: as Bell, Rogers, Telus and Videotron move from cable to digital, the obligation to fund local news would follow them to the new platform.

It’s worth noting that the cable companies’ financial ability to cross subsidize the expensive task of news journalism has diminished over time, with profit margins dropping to around 10% over the past few years.

However the windfall $120M from repealed Part II fees should go straight into local news, something CAB President Kevin Desjardins told Heritage MPs might happen, but the TV companies have made no such commitments.

Second, the CRTC would be instructed to consider tithing foreign online undertakings Netflix, Disney and others to support local news. Whether that’s a good idea would be up to the CRTC when it designs the overall scheme for streamer contributions to Canadian content. It might be the big streamers split their CanCon contribution between drama and news, or just do drama. It’s worth remembering that local news spending is a third of Canadian Programming Expenditures.

Some of the push back to the Unifor amendment was expressed by Senator Simons as skepticism about propping up local news on the declining linear TV platform:

I have boundless sympathy with argument you are making.

But my first question is, won’t the problem be dealt with in some ways by C-18.

That sort of view chafes the CAB’s Desjardins, who had to remind senators earlier this fall that video “television” news may be made by journalists employed at Canada’s eighty or so local stations, but it’s distributed and consumed on all platforms: linear, web, and a bevy of social media apps:

On multiple platforms, “television” news is by far the biggest source of Canadian local news: 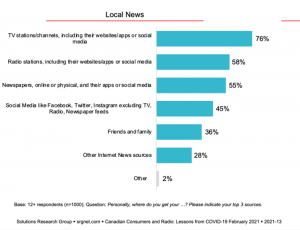 There is also the matter of whether TV companies should be better funded by both TV companies (Bill C-11) and digital platforms (Bill C-18). (You will note that public money is involved in neither of them.)

It was inevitable that an argument of “double recovery’ would be tendered with these two bills in Parliament at the same time.

The policy basis for Bill C-18 is to rebalance the one-sided bargaining power between Canadian media companies and the digital platforms over fair compensation for monetizing and distributing the intellectual property in news content.

It could be there is no Facebook or Google money owing at all to TV companies, or perhaps there will be as much as the $247M predicted by the Parliamentary Budget Officer.

Once the dust settles and the bill is paid, the CRTC will be able to assess the financial stability of Canadian local TV stations and decide which if any of them still need the industry cross subsidies that the Unifor amendment would permit.