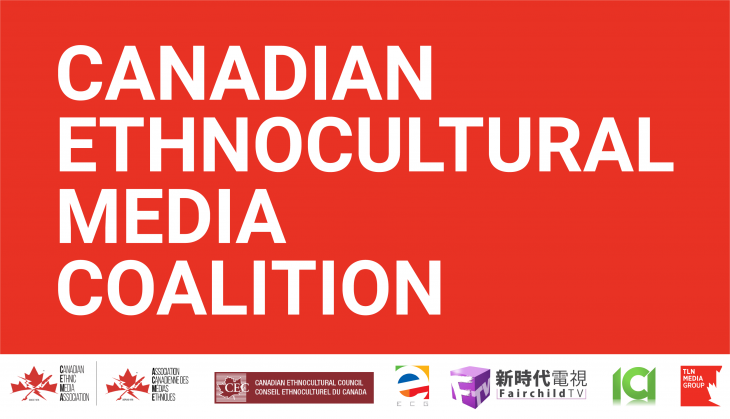 “Language is at the heart of cultural identity; it shapes who we are and our perspectives. When we speak our languages, we share stories, pass on knowledge and create bonds for generations.” – Patrimoine canadien – Canadian Heritage, Ottawa, June 14, 2021

EARLY LAST YEAR a group of organizations came together to advocate for inclusion of diverse communities and ethnic programming in Bill C-10. We called ourselves the Canadian Ethnocultural Media Coalition (CEMC). The initial group has expanded and now includes the most active and prolific ethnic media organizations in the country (see list of members below).

As Parliament prepares to again ponder modernizing the Broadcasting Act, we are restarting our efforts to secure official recognition as having a place and a value in the system, something that is long overdue given the demographic makeup of this country, with one in five Canadians reporting a non-official language as the language most often spoken at home.

However, the most recent expert study on broadcasting policy reform – the Broadcasting and Telecommunications Legislative Review Panel – not only ignored multicultural media in its 97 official recommendations, it didn’t even mention multiculturalism or ethnic broadcasting in the entire 235 page report.

Unfortunately, the Canadian ethnic media industry has never been recognized and allowed full membership in our broadcast system. The CRTC Ethnic Broadcasting Policy was issued in 1999 some 23 years ago during the analog age and has never been updated.

To be precise, I am not talking about extending an invitation to the diverse ethnic minority communities of Canada, to participate in creating, consuming and working in mainstream media. Fortunately, that is happening. Rather, I am speaking of Canadian programming produced by and delivered to our ethnocultural communities. Ethnic media creators and operators have been denied appropriate and proportionate recognition and supports.

Let’s look at the present context and realize how this is a truly serendipitous moment. First, Canada’s official multiculturalism policy established in 1971, just passed the half century mark. Second, Canada’s Charter of Rights and Freedoms is about to complete its 40th anniversary (it came into being on April 17, 1982) and Section 27 calls for all of those rights to “…be interpreted in a manner consistent with the preservation and enhancement of the multicultural heritage of Canadians”. And of course, our nation has never been more ethnoculturally and multilingually diverse as we are today.

All four pillars of Canadian society should be recognized, reflected, supported and participate in our broadcasting system: Canada’s French and English founding cultures; Indigenous communities; and the diverse ethnic minority communities of Canada, including Black and racialized communities.

The Broadcasting Act should recognize that full participation in the system includes production of content and operation of broadcasting services. It should also ensure such Canadian content, including ethnic programming, and such Canadian services, are made available and visible, not marginalized.

Therefore, we are again proposing inclusions to reflect Canada’s ethnocultural diversity in legislation to amend the Broadcasting Act. These amendments will ensure that the Act recognizes diverse ethnic minority communities appropriately. This will in turn ensure that regulatory action focuses on concrete measures to address systemic inequities.

Given the pressures being exerted on our sector by a fast changing media content industry, we desperately hope and remain determined to see our value acknowledged and our place in the system secured.

Aldo Di Felice is president of TLN Media Group and a member of the Canadian Ethnocultural Media Coalition.

The full list of CEMC member organizations and their representatives includes: