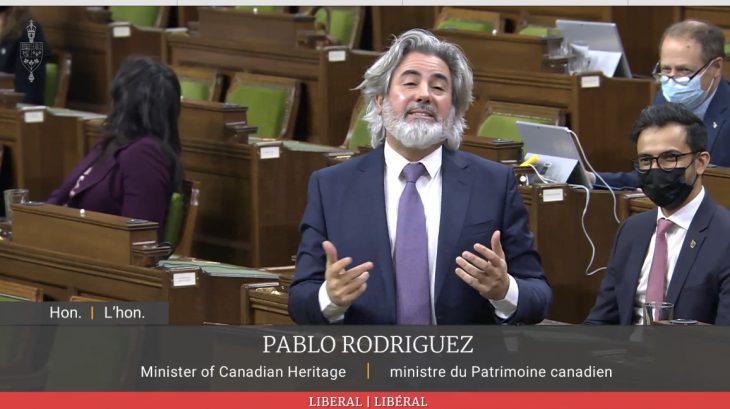 ONE OF THE MAIN arguments offered by Heritage Minister Pablo Rodriguez (above) in support of Bill C-11, the Online Streaming Act, is that it will “update Canada’s broadcasting rules to include online streaming services and will require them to contribute in an equitable way to our culture.” Yet if passed as presented to the House of Commons in February 2022, exceptions and gaps in Bill C-11 mean that it may deliver much less than promised.

To begin, Bill C-11 specifically excludes some broadcasters from all or some aspects of Canada’s broadcasting legislation. Take, for instance, the programming available online from a company whose main business does not involve the distribution of programming to Canadians – companies, say, like Apple or Amazon. A new section created by Bill C-11 (section 2(2.3)) excludes from the Broadcasting Act “a transmission of programs” online made to provide clients with information or services directly about “a business not primarily engaged” in program transmission.

This may have been intended to ensure that short programs posted online by small businesses to advertise their non-broadcast-related work to prospective clients were clearly to be outside of the Act’s jurisdiction. As presented to the House in February 2022, however, could this exception not apply as well to online programming transmitted by Apple TV+ or Amazon Prime? Such programming, after all, could be said to be simply providing information about a related aspect of their owners’ primary businesses – the sale of recorded audio-visual content, in the case of Amazon, or electronic devices that can display or access audio-visual content, in the case of Apple.

Whether C-11 intentionally or unintentionally excludes all companies whose main business is not based on broadcasting, it is also unclear why it is necessary to make such an exception through a definition: after all, the Broadcasting Act and Bill C-11 already permit the CRTC (through existing and proposed sections 9(4)) to exempt entities engaged in broadcasting activities when these are clearly unable to contribute to the implementation of Parliament’s broadcasting policy for Canada.

“Apart from exceptions, Bill C-11 has gaps – inadvertent or other omissions that make it difficult or even impossible to apply the Broadcasting Act to real-world situations”

What, incidentally, is the rationale for Bill C-11’s inclusion of a new reference to exemption in the Broadcasting Act’s regulatory policy in section 5? Subsection 5(2)(h) now tells the CRTC it must avoid imposing obligations on broadcasters if this will not materially contribute to Parliament’s broadcasting policy for Canada – since the CRTC has been exercising its exemption power since 1991 why is this new regulatory-policy section required?

Bill C-11 seems to create another exception in the Broadcasting Act’s broadcasting policy for Canada regarding the control and ownership of the broadcasting system, stating that this system “… shall, with the exception of foreign broadcasting undertakings providing programming to Canadians, be effectively owned and controlled by Canadians”.

What does this section mean, and what is it intended to achieve? Is its wording clear enough to be enforceable? Even if this clause were clear and enforceable, to what does it apply? Since cabinet now prohibits the CRTC from granting non-Canadians licences for offline radio and television services, would this foreign-services exception only apply to online broadcasting? If so, and if passed as presented to the House, Bill C-11 might well leave Canadians with complete ownership and control of 20th century offline broadcasting serving Canadians, while ceding to non-Canadians near-complete control of the 21st century online broadcasters that also serve Canadians.

Apart from exceptions, Bill C-11 has gaps – inadvertent or other omissions that make it difficult or even impossible to apply the Broadcasting Act to real-world situations. For instance, after giving the CRTC the discretion to decide whether to intervene to ‘continue’ the Canadian ownership of Canadian broadcasters, Bill C-11 empowers the Commission to determine the ownership of broadcasters – but only if these are licensed or exempted from licensing: Bill C-11 creates a gap because it would also allow online broadcasters to operate without being either licensed or exempted.

If Parliament wants the CRTC to ensure Canadian ownership of the country’s broadcasting system, should it not empower the Commission to determine the ownership of any broadcasting service that operates in Canada and provides programming to Canadians, whether it is licensed, exempted from regulation or simply carrying on broadcasting in whole or in part in Canada?

Another gap exists regarding reasons and evidence. Bill C-11 highlights the importance of original programming for Canada’s minority official-language communities: it specifically requires the CRTC to consult with these communities “when making decisions that could adversely affect them” and, in particular, to “provide them with all relevant information on which [the CRTC’s] policies, decisions or initiatives are based”.

Perhaps this requirement is intended to ensure that such consultations take place when the CRTC makes decisions about minority-language programming. Yet neither the current Broadcasting Act nor Bill C-11 requires the CRTC to explain any of its other determinations, except when suspending or revoking broadcasting licences. Surely equity demands that all communities affected by the CRTC be entitled to ‘all relevant information’ on which its determinations are based.

Bill C-11 also adds to the Broadcasting Act new terms that are not defined, including “showcasing”, “discoverability”, “social media service” and the introduction of a requirement that the CRTC prepare itself to “alter” policies, decisions or initiatives affecting official-language minorities communities. Are all of these terms so universally known and clearly understood that they need not be defined? If not, how will they be enforced?

Because Bill C-11 specifically excludes all online undertakings from the definition of ‘network’, this means that free political time will only be available from licensed or exempted radio and television networks operating offline – political parties will apparently have to buy time to advertise through online broadcasting services. And insofar as free time during elections is concerned, Bill C-11 also empowers Cabinet to issue directions to the CRTC when it determines the proportion of time that offline broadcasters must devote to partisan political programs or ads as well as that time’s allocation to political parties. What explains these changes, and what is their intended outcome?

Exceptions and gaps are not the only problems from which Bill C-11 suffers though, like the others, they can and must be corrected. If left alone little will remain in terms of effective, coherent and symmetrical regulation of offline and online broadcasting. Leaving these problems in Bill C-11 to ensure the bill’s swift passage and enactment risks the creation of a regulatory regime that functions even more poorly than it does now.

Effective laws resemble well-designed maps by being clear and complete: the only other remedy for ambiguous wording or missing pieces will be the courts, a process that costs not just time and money, but also lost opportunities. Although Canada needs new legislation to address the online world, Bill C-11’s language must be as precise and error-free as possible, both to limit delay-causing court battles and to ensure new broadcasting legislation for the 21st century can be implemented to achieve the best results for Canadians. Parliament must fill in the gaps and clarify the language of Bill C-11.

Monica Auer is executive director of the Forum for Research and Policy in Communication.