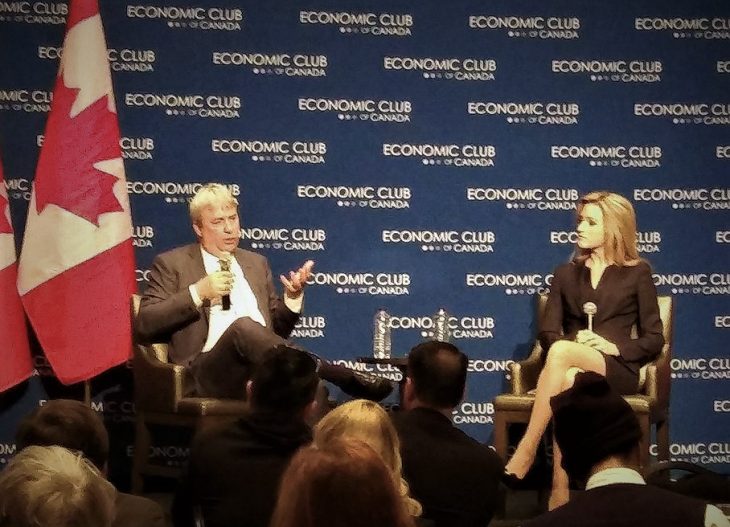 TORONTO — The media industry is “filled with promise”, said Wade Oosterman, group president for Bell Canada, but competing in a global economy offers a wide variety of battles to be fought on many fronts.

For Bell, deploying fibre and wireless networks is very expensive – while funding TV content also takes a lot of cash, he said, adding that media companies also need a regulatory environment that doesn’t hinder their ability to compete against the likes of Netflix, Amazon and Apple TV.

Oosterman, who oversees Bell Media, Bell Mobility, and Bell Residential and Small Business, made his comments during a fireside chat about the future of Canada’s media economy with Catherine Murray, host of Bell-owned BNN’s Business Day PM and Market Call shows. He was a last-minute speaker substitute for Mary Ann Turcke, who earlier this week left her position as president of Bell Media to take a job at the NFL.

Speaking about Turcke, Oosterman said it was cool that a Canadian woman would be running the network for “one of the most male-centric sports leagues in the world”, as he put it. “When she left, we said, ‘Okay, let’s take her leaving and let’s think about this environment where we’re competing against global giants to buy content’.”

With that in mind, as part of its strategy to develop more original content, and thereby reduce its need to compete against Netflix and Amazon to acquire expensive third-party content, Bell promoted Randy Lennox as the new president of Bell Media. During his years as head of Universal Music Canada, Lennox developed an eye for talent, including finding artists such as Drake and The Weeknd, Oosterman said.

“As we get into this world of some of the content we have to develop ourselves, it has to be world class, it has to be really good. So we have somebody who has that demonstrated ability [to spot talent],”he explained.

In addition to delivering quality content to consumers, media companies in Canada also need to ensure their customers can access content on their screen of choice, whether it’s a smartphone, tablet or traditional TV, Oosterman continued. “They just want to watch what they want to watch, on the screen that is available at that moment in time. So [you need] to enable delivery of that content to a multiplicity of screens across a multiplicity of platforms,” he said, adding that requires large investments in R&D and in securing content rights.

He added that he thinks it’s frightening to hear people, even in government circles, who question whether content, once it’s made available on the Internet, shouldn’t just be free to everybody.

When asked by an audience member about the effect digital media is having on traditional media from a journalistic standpoint, Oosterman said it’s part of the evolution of how information is shared. “It’s just a digital tool that people are using to get information from point A to point B, or person A to person B, in a way that’s far more efficient than anything that’s been before.”

However, from a news perspective, while anybody can be a reporter by recording something they see on the street on their cell phone and posting it to the Internet, there is still a need to mediate and contextualize the event.

“The contextualization of everything – that has to be in the hands of organizations trained to do that, and they’ll do it with balance and perspective and years and years of wisdom,” Oosterman said. “You have to have that professional judgment, and I think that’s what news organizations will continue to add in terms of value as we go forward.”

At one point in the discussion, Oosterman voiced his frustration over the CRTC’s decision to ban simultaneous substitution of the Super Bowl broadcast, which for the first time this year denied Bell the right to substitute Canadian ads on the American broadcast.

As a result, Canadian viewers who watched the Fox broadcast of the Super Bowl saw the American ads, from companies such as Wells Fargo and Target, which don’t do business in Canada and therefore aren’t relevant to Canadian consumers, he said. Bell is pursuing court action against the CRTC on this.

He seemed to be particularly irritated by the fact that it took only 92 people to complain about not being able to see the American ads during the Super Bowl broadcast to spur the CRTC into considering the issue and making a decision to disallow it. He also pointed out that the special ads produced for the Super Bowl are available online a week before the game airs.

“So 100% of Canadians [with access to a computer] could have seen those ads, but 92 people said, ‘I want to watch them on my TV,’ and because of that the CRTC ruled we can no longer swap out Super Bowl ads, we have to show the U.S. ads,” Oosterman said, adding the U.S. advertisers get no benefit because they don’t do business in Canada. “It’s really weird, don’t you think?”

(Ed note: Bell executives and others should stop using that number. We analyzed the Super Bowl simsub issue here and overall, we believe it was a poor decision, but it’s disingenuous to say that only 92 Canadians were upset about this issue. Yes, maybe only 92 took the time to write, but Super Bowl advertising is something many Canadians have moaned about for some time, so to keep throwing this number out there seems silly and counterproductive.)