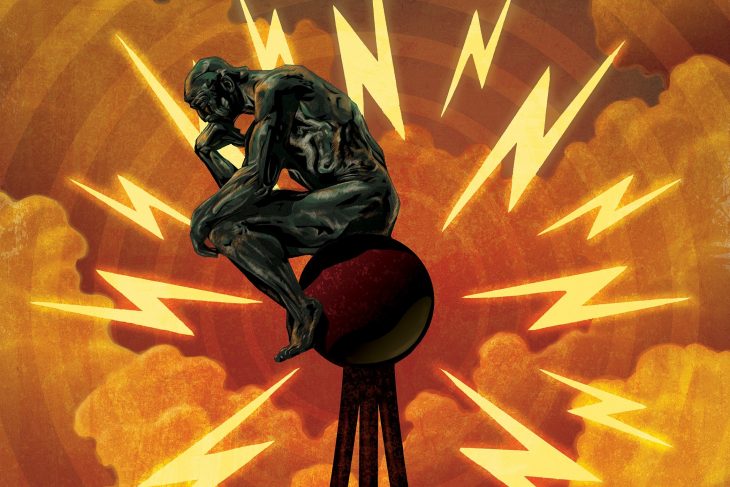 I WAS A YOUNG ENTERTAINMENT lawyer in the late 1990s when the Internet changed the course of my career.

My practice ranged from artists to financiers to producers to many of the U.S. broadcasters and studios doing business in Canada. The industry had been growing quickly but all of a sudden there began a massive consolidation of the media business, with many distributors and broadcasters being acquired by the American studios. The process started around 1996 and ended in 2001 with the ultimate media deal of all time – the AOL/Time Warner merger. During that period, I lost a number of major clients to acquisition, as they were rolled-up into the studios and conglomerates.

Eventually, it became clear the reason for the merger mania was the arrival of the Internet. The studios believed it would disrupt their control of distribution, so they defensively acquired as much of the content as they could and began integrating with Internet companies so they could own that as well.

The AOL/Warner merger was amazing in retrospect. You had an Internet start-up, AOL, buying an 80-year-old studio with considerable real assets. Of course, the deal turned into a fiasco and ended up creating a $99 billion dollar loss only a few years later. Time Warner’s executives and the equity firms that funded the deal had moved too early and paid for it dearly. It would take another 20 years for the technology infrastructure of the Internet to catch-up and bring about the disruption they feared.

My attempts to make sense of this period – after much reading and reflection – eventually led me to Professor Tim Wu and his book, The Master Switch: The Rise and Fall of Information Empires. In this book, Wu chronicles the history of information technologies in the United States beginning with the telegraph and then telephone, radio, film, television and on to the Internet Age. Wu demonstrates clearly in the book a pattern that he calls “The Cycle”, that appears to apply to all technological innovation.

He states: “History shows a typical progression of information technologies: from somebody’s hobby to somebody’s industry; from a jury-rigged contraption to a slick production marvel; from a freely accessible channel to one strictly controlled by a single corporation or cartel from an open to closed system.” Essentially, every disruptive technology gradually becomes controlled by a few powerful entities – often by the companies it is trying to displace.

It’s now a decade since Wu published this book, but his comments then seem prescient now. “If the Internet, whose present openness has become a way of life, should prove as much subject to the Cycle as every other information network before it, the practical consequence will be staggering. And already there are signs that the good old days of completely open network are ending.”

He was right then and even more right today.

In the digital platform space the signs are everywhere that we are again moving towards Industry consolidation. Disney acquired Pixar, then Marvel, LucasFilm, Fox and Hulu, and then launched Disney+. Fox has just bought Tubi. Viacom has re-united with CBS/Showtime and purchased PlutoTV. Comcast has launched the NBC/Universal brand, Peacock, and acquired streamer Xumo. HBO Max has launched for AT&T.  This is the pattern – this is the Cycle. The past was a prologue – we are looking at a period of consolidation over the next few years that will make the late 1990s look like a dress rehearsal – because it was.

The television channel business changed considerably in the late 1980s as cable and satellite adoption increased. In the early ’90s there was an explosion of channels so that by the late ’90s we were pushing the limits of capacity and distribution. This situation, along with the arrival of the Internet, led to a mad scramble for consolidation to control distribution.

“It has often been said that ‘content is king’. That may be true but it if is, distribution is the kingmaker.”

The reasons for consolidation were similar then to as they are now. They come down to the interplay of content and distribution. It has often been said that “content is king”. That may be true but it if is, distribution is the kingmaker.

The content paradox is this: content markets and distribution markets are inextricably intertwined, yet they are fundamentally different types of markets. Content is a creative process that is very difficult to commoditize and scale. Distribution is primarily a technological process that naturally scales – even more so on the Internet where network effects lock in the consumers. Direct to consumer also creates a direct relationship between the digital platform and the consumer, offering better first party data and the opportunity to market to them directly.

Unlike so many consumer products, content is difficult to commoditize. This is because it requires a creative process that is usually driven primarily by a small group of people – producers, showrunners, directors, writers, actors and other key creatives. This also means that there are fewer barriers to entry – at least at the production stage – which is why Netflix, Amazon and Apple could scale production to a studio level so quickly. Content markets are also enormous – perhaps the biggest business opportunity in the world in the coming decades.

Apart from the creative process, there are several other key aspects of content markets that differentiate them from many other markets. The first is we consume an incredible amount of content. A recent eMarketer study says we watch 62 minutes per day of subscription on demand content alone. This means we’re constantly seeking out new and different types of content. A consumer can easily consume in one day a season of a television series like Game of Thrones that took a year or more to produce, on a television set they replace only once every seven years or so.

In addition, competition is not always head to head. Someone who loves Game of Thrones will also be interested in other similar types of content. Every content vertical, from superhero movies to children’s animation to cooking shows, has its own sub-ecosystem. More than one – often more than dozens – of companies can survive and even thrive in these market verticals – so long as they are allowed to compete – meaning fair access to the means of distribution.

The point is, Canadian content producers can make different types of programs at different budget levels and be successful – from Schitt’s Creek, Orphan Black, Murdoch Mysteries and Wynonna Earp, to reality television and even YouTube shows. We may want producers to make larger budget programs and find ways to support that. However, what we also need to do is give them a foundation within our market to create original programs – Canadian content – that can compete for audience in Canada, seek markets globally, and pay back to the Canadian creators and companies that made the content in the first place.

Fair access to distribution makes scale relative, not absolute. However, without fair access it is impossible to recoup your investment.

“It’s therefore critical that we create a solid foundation within Canada before the coming concentrations make it even harder – if not impossible – to regulate. “

Original content also has a very high failure rate. Unlike so many consumer products, it is difficult to fully test with audiences before release and certainly before substantial time and financial commitments have already been made. This is why so much of it fails – even for the larger players. This is also why acquisitions and proven formats are so much easier and, along with sports programming, a safer investment for large, publicly traded media companies – at least in the short term.

However, our culture and creative industries need to focus on original programming to express our Canadian identities, to compete in global markets and to return value to Canada. In the long run, creating original programming that pays back to Canadian rights owners and services is our only cultural strategy. Executing this strategy requires granting us fair and equitable distribution.

We also have to be mindful how original content production is inherently risky for everyone. As digital platform markets mature there is always the temptation for the companies that control distribution to enter the content market and push out competition. This is the risk management strategy that Professor Wu identifies as “the Cycle.” This is particularly true when platforms have their own content offerings.

It’s therefore critical that we create a solid foundation within Canada before the coming concentrations make it even harder – if not impossible – to regulate.

Brad Danks is CEO of OUTtv and adjunct professor of law at the University of Victoria. Part III, “The Canadian Solution” will appear next week.